Menu
Log in
Register
Install the app
You are using an out of date browser. It may not display this or other websites correctly.
You should upgrade or use an alternative browser.

I have two bulbs from last year...how do you get your amaryllis bulbs to re bloom ?
S

Do you have the bulbs planted in a pot? If not bury them in seperate pots leaving the crown and a bit of the bulb above the soil line, put them in moderate light and give them a good drink of water and watch them grow.Post pictures as they are growing. I love Amaryllis

Yes, I was told to let them grow over the summer, then give the a dormant stage....it was on the box when I received them....so they are still in the pots...so I shall water...and hope they re grow...thanks

I have heard they arent easy to get to re bloom..is this true ?

I will take pictures...my son bought them for me last year..so I really hope I can get them to bloom again.

thanks for the help.

I have never been able to get them to re-bloom. I think it is because I don't have a place to rest them that is the right tempature it is either too warm or way too cold.
I wish you all the best luck with yours. I love amaryllis

Cool I found this site that has great info on it.
http://www.usna.usda.gov/Gardens/faqs/AmaryllisBloom.html
hope it helps

one of mine is blooming now, I'm waiting for my other one to bloom, I let them bloom then cut off the flowers after there done blooming and water a little just to keep them alive until I can put them out side and in the fall I bring them in and cut them back give them a few months of rest or until I see new growth then I start to water and feed them so far they have bloomed for all most 5 yrs,I lost the name tag years ago so the name is lost but I don't care I like it 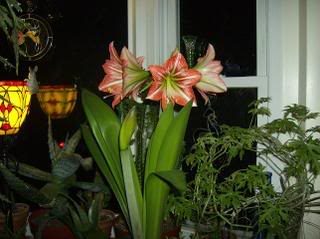 I don't think my amaryllisas are going to bloom. I have 6 of them that has bloomed in the past years without any problems. I repotted them all in early november. They are now over 4ft. tall and not a sign of any buds. Should I cut them back and wait a few months and try again? Any ideas on what to do?

Maggie said:
I don't think my amaryllisas are going to bloom. I have 6 of them that has bloomed in the past years without any problems. I repotted them all in early november. They are now over 4ft. tall and not a sign of any buds. Should I cut them back and wait a few months and try again? Any ideas on what to do?
Click to expand...

No, don't cut the leaves back!
Instead, feed the your bulbs! They are hungry and wont flower untill their bulbs are fattened up!
I use 10-30-15 which is water soluable and can be used at helf strength every other week while actively growing!
A healthy flowering size bulb is around the size of a small, to medium sized grapefruit.
One of mine, a red one called Lucky Strike' has set 4 flower stems and the first bloom should open tomorrow! This one usually blooms 3 to 4 times a year! I'll post a photo tomorrow!

Ron
Can't wait to see your amaryllis picture.
I have to admire anyone who can get them to rebloom.

Staff member
Ron
I've never been able to get one to rebloom once and you get 3-4 blooms a yr.
Can't wait to see your pics

Staff member
Just ran downstairs with my camera to take these pics!
The lighting on the closeup is a bit off!

Maggie
It will take a bit longer then just a week, or so, to bud up!
Mine never bloom at the same time, it only blooms when it's ready! Amaryllis time doesn't run the same as ours, they bloom on their own schedule!!

This one will bloom again in May, then again, if it feels like it, in July....then again, maybe, in late September!
I think growing them outdoors from early May to mid to late October sets them up nicely to bloom. I have them under a gazebo and receive morning sun! I feed them a lot and keep the soil well watered while they are actively growing.

Staff member
Awesome Ron. Will have to get another one and try it. Got rid of the ones I had.

Staff member
Since there were two amaryllis threads I merged the two into one for easier access and to keep things simple! So, you guys are not going crazy!

I got two a few years ago and didn't take them from the box until the next year, but just because I started watering them and had two beautiful 4th of July amaryllis! Last year they didn't do much other than the leaves, but I brought them inside and put them in the basement. I just give them a splash of water every couple weeks. They're both starting to sprout a leaf now. I'm thinking I'll probably have 4th of July flowers again. I haven't repotted them or anything so I'll see how they do. My basement isn't that warm, but I'd say it's probably about 60 degrees. The only light they get is from one small window with a southern exposure. My calamint, lantana, and aloe are all greening up or growing, too.

Staff member
Here's an updated photo of all 4 flower stalks: